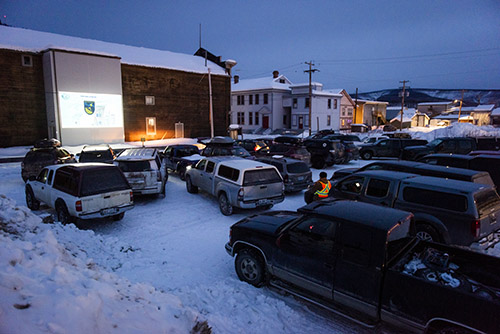 The 2021 Dawson City International Short Film Festival returned to its April time slot with people inside and outside watching films! Our cinema opened with limited seating and people responded with over half of the screenings selling out. Attendees were treated to in seat service of our wonderful concessions (a different menu every day). Our 2nd drive In night at the legendary Palace Grand Theatre was a rousing success as the snow held off allowing people to even sit outside in the backs of their pick up trucks.

We are pleased to announce the winners if the 2021 Awards.
The MITY (Made In The Yukon) Award (professional category) goes to Pandemic At The End Of The World by Allan Code. A poignant documentary featuring an elders views on pandemics old and new. Honorable mention went to Lulu’s Keating’s sharp and imaginative King Covid. The MITY is sponsored by Gold Rush, SPYA, and the Yukon Film Society.

The Emerging Artist MITY went to Claire Ness for her charming film, Keno City Hooker, set outside the now bygone Keno City Hotel. This award is sponsored by Outpost 31, the Yukon Film Society and KIAC.

The Lodestar Award for best film from outside the Yukon went to the acrobatic Talk To Me by Jules de Niverville form Québec. Talk to Me also won the Yukon Brewing Audience Favourite Award. Heartland(Terrestes) by Norman Rajotte was given an honorable mention. 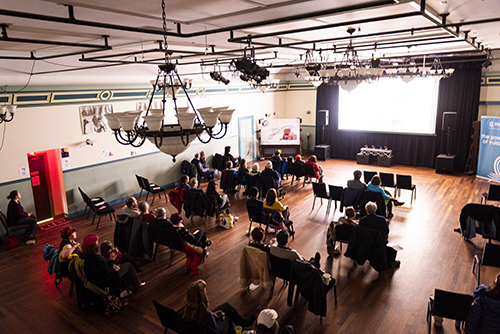 We want to thank all of our volunteers, sponsors, attendees and filmmakers that make this event possible. 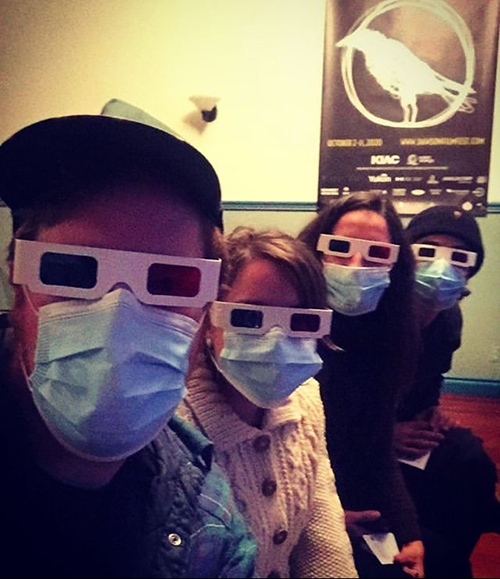 We are please to announce the winners of the awards from the 2020 Dawson City International Short Film Festival.

Thanks to all who came out, volunteered, sponsored or otherwise supported the film festival in it’s pandemic form! With ballroom screenings, a Drive in Theatre and outdoor installations from the Cold Cuts Video Festival it was an exciting 9 days!

The MITY (Made in the Yukon Award)  for best professional film went to Jayden Soroka for THE PROVIDER. A film that beautifully mixes animation and storytelling relating a man’s first hunt at the age of thirty three. The provider also won the Yukon Brewing Audience Favorite Award.

Honourable Mention goes to Krista Davis’ BEING SO CLOSE TO YOU (A Story for the Arctic Refuge). A poetic rendering of her trip to ANWR to seek out caribou and beyond.

The MITY Emerging artist award went to Talia Woodland for her film ALL THAT GIVES, an honest and revealing portrait of Kosi Eze, a Nigerian immigrant who moved to Canada when she was 14 and discovers expression through Hip Hop dancing.

The Yukon Youth MITY went to BOXED IN, by Darius and Katie MacLeod, made in the Ice-Solo-Elation video Challenge!

The Lodestar award for best Canadian or International Film went to the documentary JESSE JAMS, by Trevor Anderson. The film follow a young Indigenous trans musician and his mumble punk adventures.

The 2021 DCSIFF is now in motion! Submit your film here.

by Dan Dowhal (From the Klondike Sun)

In a year where the bizarre has become commonplace, the strangest thing about the 2020 Dawson City International Short Film Festival is that it took place at all as a real-world event. Throughout the world, and here in Dawson, other festivals had been cancelled, or else moved into the virtual realm.
Originally scheduled for the Easter Weekend, KIAC opted to postpone rather than cancel the event when the pandemic struck earlier this year, and ultimately moved DCISFF to the Thanksgiving Weekend (as well as the week and weekend before) after a summer loosening of Yukon public health restrictions allowed limited public gatherings. An abundance of precautions were in effect at screenings, such as mandatory mask wearing, online ticket sales, no food or beverage service, and a greatly reduced seating capacity to facilitate physical distancing. (This followed four sold-out and incident-free September screenings in the KIAC Ballroom of Suzanne Crocker’s new film, First We Eat, which served as a test case for the feasibility of showing films to a small, widely-separated live audience.)
While this year’s restrictions took away the schmoozing and socializing that has typically accompanied the Dawson film festival, the point of the event is ultimately the screening of movies and showcasing of local talent, and so that aspect certainly went forth with resounding success. DCISFF showed almost 80 films in total, including dozens produced by Yukoners and Northerners.

Arguably, the highlight of the festival was a mid-week drive-in movie screening  — a Dawson City first — held in the parking lot of the Palace Grand Theatre, thanks to support by Parks Canada. Movies were projected against the side of the building, while the sound was broadcast over CFYT 106.9 FM. There was an early showing for kids at 7 p.m., which included many of the festival’s films produced by Yukon youth, then a sold-out late showing at 9 p.m. Despite a steady drizzle all evening, the screenings were deemed a resounding success, and movie-goers showed their applause by honking their car horns.

This year’s DCISFF also included two related art projects that were run within the festival umbrella. On Tuesday 6 October, the festival featured a Drone Day Installation, also staged in the parking lot of the Palace Grand. Drone Day is an international event that takes place annually on the last Saturday of May. Experimental musicians across Canada gather in small groups and online to create droning works — a musical subculture based on ambient sound. This year, nine Whitehorse musicians ventured to a remote quarry “to bring musical drones to the woods and mountains.” DCISFF's Drone Day installation immersively re-created the musicians’ experience with a quadraphonic, surround-sound, and video installation using the audio captured on that day, which employed synthesizers, singing bowls, accordion, theremin, and saxophone.

The Friday before the festival’s Thanksgiving weekend finale saw the opening for the Cold Cuts Video Festival, which has been part of DCISFF for many years, and returned after a one-year hiatus.  Cold Cuts is an annual curated exhibition of video works by contemporary Canadian and international artists. The theme for this year’s edition was “Imagined Futures,” and featured Canadian artists using imagined futurescapes to investigate identity, politics, and place to critique and reflect, and to envision new potentialities. 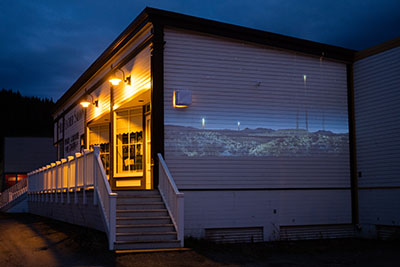 The Cold Cuts opening event took place at the waterfront at the Art Market Building, and featured a bonfire and socially distanced outdoor gathering. The video installations themselves were available all Thanksgiving weekend, and in addition to the Art Market, were located in the windows of the Odd Gallery and the Red Feather Saloon — more concessions to the reality of physical separation in 2020.

Among the screenings on the final weekend were First Eyes, a Saturday matinee showing of short films by indigenous filmmakers, and curated by Dawson artist Kerry Barber. Always popular and thought-provoking, this year’s collection included not only Canadian films, but also works by Samoan and Sámi filmmakers.
The culmination of the Dawson Film festival was a screening of Sovereign Soil, a new feature-length documentary by local filmmaker David Curtis. The film was shot over five seasons, and explores local food production around Dawson City. With its focus on of food sustainability the documentary is certainly timely, as it relates the relationship to the land and the diverse perspectives of various people growing and harvesting food in the Boreal climate. 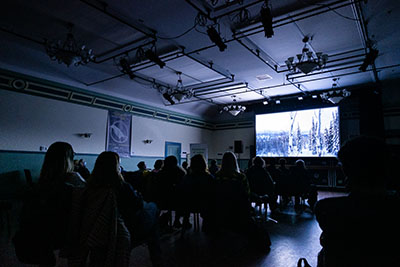 Festival Director Dan Sokolowski was pleased with the way the revamped DCISFF turned out overall. "We think the festival was a great way to re-introduce live events into the KIAC (Dënäkär Zho) Ballroom and also to add on some innovative events like our Drive-In Theatre at the Palace Grand and outdoor installations with the Cold Cuts Video Festival," he said. "We were thrilled to be able to bring the eclectic mix of films that is the DCISFF to the community directly even though some of them had to be seen through windshield wipers! We now jump into the 2021 festival — April 1st to 4th, COVID willing — and can't wait!" 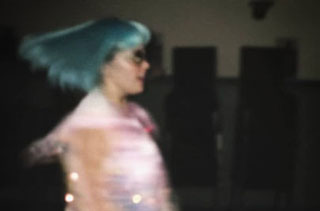 The 20th film fest finished with a bang hosting Studio 20/20, a Studio 54 remake in the ballroom. Two days later, the Yukon River “broke” with a whimper, sending a small pan of ice ¼ mile downriver, announcing that spring had finally arrived.

The rest of the weekend was filled with excitement, good times, wonderful films and great atmosphere at workshops, meet and greets and between screening gatherings!

It all started with the world premiere of Chris and James Healey's The Winter Folk ,a finely crafted documentary on the people that inhabit the Klondike and specifically how winter affects them. 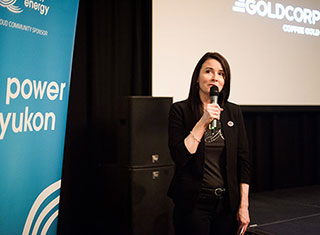 Yukon films were strewn throughout the festival in screenings on every day of the festival, culminating with a special retro screening of some of the festival favourites from the past years. 45 of the 95 films shown were created in the Yukon.

The festival was more than just films. With workshops on Editing, creating iPhone movies, Haptic Visuality, The World of Short Film according the Danny Lennon, Run and Gun Gear, there were also video installations by Jillian McDonald and Marten Berkman, a live street concert complete with plates of home made perogies, a burlesque performance by Chevonne of the Yukon, and the finishing Studio 20/20 dance party!

We look forward to our 3rd decade of bringing media arts to the Klondike on the beautiful traditional territory of the Tr'ondëk Hwëch'in.

The MITY (Made in the Yukon) film awards highlighted the final Sunday night screening.

The MITY Youth Award went to Clement Potoroka for his film Sea Shells by the Sea.

The Lodestar Award for best overall film was claimed by the mockumentary, The Last Days of the Man of Tomorrow by Niklas Hlawatsch of Germany. 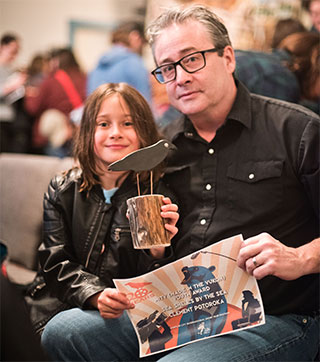 Thanks to Our 2019 Funders and Sponsors